‘Teerthdham Mangalayatan’ is a Jain pilgrimage complex, promoted and developed by Shri Adinath Kund-Kund Kahan Digamber Jain Trust, at Aligarh, India. It is not just a group of temples, it is actually the realization of a broad socio-religious concept that encompasses devotion, social service, education and socio-religious research activities.

The temple-cum-research complex is situated on the Agra Road (Aligarh-Agra Highway), at a distance of around 13 kilometres from Aligarh and spans over an area of 16 Acres. The Temple complex includes 5 temples.

The Temple complex includes 5 temples within the complex area: 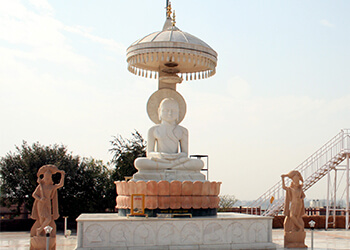 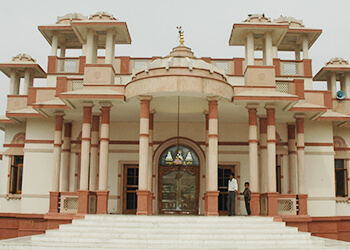 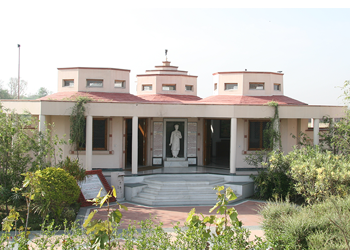 ‘Teerthdham Mangalayatan’ complex is considered one of the largest Jain religious centres of its kind in the country.

It is the auspiciousness of Tirthankar Lord Mahavir, infinit Teerthankara, five supereme beings, Lord Manscript, Pujya Gurudev his follower Champaben and with the help of great personalities that the built Teerthdham Mangalayatan is a meditatory land of the followers of truth. This place is not personalized but it belongs to everyone. Mangalaytan is ending preaches of omniscience to every person.

The word ‘mang’ means ‘happiness’, and the one who brings happiness in our lives (Al-Layati) is called ‘mangal.’ (Shridhawala, Book-1, Page-34/35)

Another interpretation of Mangal (Mam+Gal) is: The word ‘Mam’ means sin, and the one who save us (Gal) from the sin is called ‘mangal.’ (Acharyakalpa Pt. Todarmalji, Shri Mokshamargprakashak, Adhikar-I).

Ayatan is Sanskrit word means volume or place. Therefore, a place that is instrumental in bringing happiness to our lives and saving us from our sins is called ‘Mangalayatan.’

Let all of us come together to make ‘Mangalayatan’ a great pilgrimage centre that rekindles the light of happiness, truth, non-violence and ‘dharma’ into each and every devotee’s soul. Let it inspire every human being to follow the path of righteousness and learn to live in harmony with all other living and non-living entities.
Let’s make ‘Mangalayatan’ project a grand success!