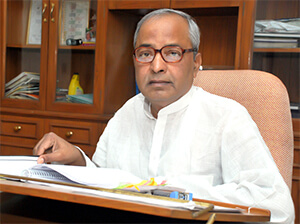 ‘Mangalayatan’ is the brainchild of Sh. Pawan Jain, who, due to the sanskaras that he got due to being born in a highly religious family and the good karmas of his earlier lives, decided to work dedicatedly for the sacred cause. Inspiration for accomplishing this Herculean task came from his father Pt. Kailash Chand Jain, who himself is a great Jain scholar. Gurudevshri Kanji Swami’s blessings and a divine support made the project possible.

Sh. Pawan Jain, Chairman of Aligarh’s well-known Pavna group of industries and an active member of many social and religious organisations, actually wanted to construct a building of an engineering college at the location. But he changed his mind and decided to donate the land for the cause of Jainism. He came up with an idea of building a Bahubali temple complex at the place.

Enthused with the support that he received from the fellow Jains, he later decided to expand the plan to make it a large Tirth Dham (pilgrimage centre). Apart from the land donated by Sh. Jain, another piece of land was purchased to cover an area of 40,000 sq. yards on the Agra road, near Sasni in Hathras district. "Had I not received the active support and immensely encouraging response from the Jain Samaj, I would not have been able to take this task up in my hands," Says Pawan Jain.

Mr. Jain represents the ultimate form of human devotion to God. A heart patient having experienced three bypass surgeries, he possesses an incomparable amount of energy to accomplish things that he considers his religious duty. He has only one mission, and that is Mangalayatan. A heart patient for the last three decades, he is the source of power, courage, energy and knowledge for thousands of people, who love and admire him.